Wednesday after work, I dragged my good friend Dave to a guided meditation class & dharma talk at the Insight Meditation Community of Washington. My meditation practice comes in fits and starts — I’m kind of an all or nothing gal. But I’ve been making a concerted effort to achieve a bit more balance in my old age, so I’ve rediscovered IMCW’s Wednesday nights with Tara Brach. Dave was a skeptical but good-natured participant, and I think he had a pretty nice time.  He’s also kind of a good liar, so who knows.

After it was over, Dave and I went to a really awful/delicious Mexican restaurant for the super delicious chips & salsa and guacamole.  Sometimes you have a 3-star Michelin dinner, and sometimes you have bad Mexican.  And depending on your mood that day, they’re both equally satisfying.

But then something bad happened.

As I stepped off the elevator into my building hallway, my foot went squish. Oh NO! Squish squish squish all the way to my door. (Goodbye, adorable leopard ballet flats. I’ll miss you most of all.) I opened the door, praying that someone had just spilled forty five big gulps in front of my door instead of some sort of flood situation.

Turns out, it was a flood situation. 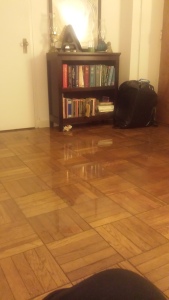 I walked into a completely flooded apartment. Water was gently trickling out from the top of the toilet bowl and from the back, too. I imagine executives at the American Standard corporation have this as a zen water feature in their offices.

I immediately shut off the water where the toilet meets the wall, but the water didn’t stop. Plumbing is hard. I called the emergency number for my building and tried to asses the damage. 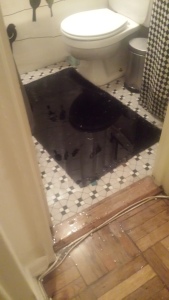 The 24-hour maintenance guy arrived about half an hour later. He walked in with a pair of needle-nosed pliars. “Oh no. What happened?” I gave him the gas face.

“I have no idea. I’ve been gone since 8:30 this morning.” His first instinct was to shut off the water. Maybe plumbing isn’t so hard after all.

He left and came back a few times (to where I have no idea). He was able to fix the toilet, but there was no way to get all the water up. Thankfully, I have hardwood floors, and since I only rent and not own, I was less concerned with what the long-term effects of standing toilet water would have on the wood. Thus, I was forced to go to bed (in the bedroom which was bone dry, thank GOD) and sleep with toilet water dominating the rest of the apartment.

I worked from home the next day so I could deal with the nonsense. Johnny, the regular maintenance guy, came and he brought a shopping cart full of tools. He also brought Leonore, who mopped the apartment with that industrial cleaner they use in elementary schools. For a few days, my apartment smelled like third grade. 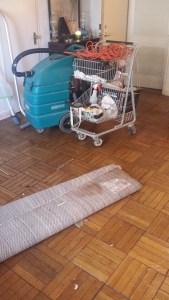 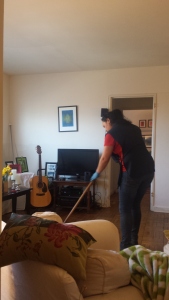 It’s important to note that there was nothing in the toilet when I left in the morning. It was empty, and because I am a dainty, aristocratic Victorian woman who poops not, we can all assure ourselves that the toilet water was practically as clean as what comes out of the tap. I’m noting it to you, but it certainly didn’t keep me from imagining that there was e-coli swimming about all over my home.  I had to do some yoga breathing about that and just give it to Mother God.

It’s been a few days now, and things have returned to normal. No major damage at all to my apartment, although I think there was some plaster damage done to the apartment below me. I asked Johnny about it and he said, “Don’t pay no mind — he caught your water with a bucket.” Lovely.

The rugs in the living room and dining room were both ruined, and my pair of fashion sneakers in the bathroom were too far gone to salvage. All in all, it could have been much, much worse, and I very much appreciate the fact that my station in life allows me to have someone come take care this. I’m fine and although it’s made a good story, it really wasn’t a big deal at all.

Otis, on the other hand, has not quite recovered. He has been WTF-ing me for a few days. I’m sure new spring birds on the ledge outside the window will help.

My 98 year old Grandma, and the best 42 player in all of Arkansas.
My Tweets