To be frank, March and I don’t get along.  I hate winter so badly and expect March to be spring instantly, and usher in warmer air, sunshine and flowers. When this doesn’t happen — and every year it fails to happen because March is still very much winter — I get antsy, frustrated and a little punchy, like jokey and silly in an on-the-brink-of-madness kind of way.

So Tuesday I was super punchy while on a routine trip to the grocery store. I am single and have very few responsibilities other than to keep my cat and myself alive, so I go to the grocery store at least three or four times a week.  Why consolidate trips? I’ve got nothing else to do. Monday or Tuesday is when I plan out my week, so I consider that my “big” trip. I get something to make for dinner that will last at least three nights and a few lunches (think gumbo, or something from the crockpot) and then some sort of quick thing to make so I can have at least one night of leftovers.  And then the other two nights I eat scrambled eggs. Yes really.  I’m going to make a concerted effort to change this whole embarrassing procedure to incorporate more healthful options but it is what it is for now. No judging.

Ok, so Tuesday.  I knew it wasn’t going to be an in-and-out thing and that I’d be going up and down every aisle to gather ingredients. But that’s when I found Jesus. 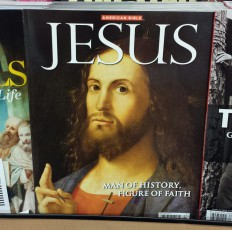 My sweet Mom has an adorable quirk. During a conversation, rather than interrupting, she’ll hold up a finger for each thing she wants to contribute when you’re done talking.  She almost never remembers what she was going to say. I really don’t mean to be an insensitive heathen, but doesn’t Jesus look like he just walked into a room and said “Now, why did I come in here?  I just needed two things… what were they?”

The longer I stayed at the store, odd items that I have never seen before began jumping off the shelf to me. 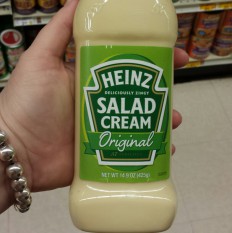 WHAT THE HELL IS SALAD CREAM????  There were SO many inappropriate sex jokes running through my mind, involving tossing salad and other gross things that are only funny if you’re a pubescent boy, or me, apparently.  But seriously, what is it? Like coleslaw dressing? 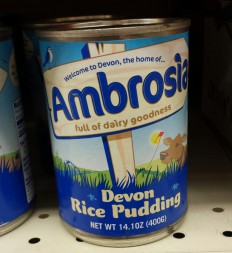 Full of dairy goodness? Look at the size of that cow!!!  He’s at least 1500 times as large as that poor lad flying his kite. The dairy goodness is surely steroids, or whatever else they’re serving up in Devon.  Also, I thought ambrosia was marshmallows, cool whip and fake fruit. 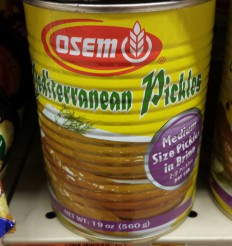 Mediterranean pickles. That are brown and shiny. These are not pickles. They are canned slugs. 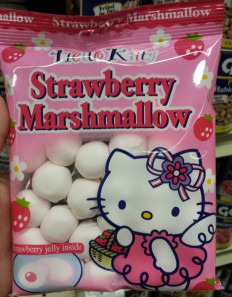 I am having trouble understanding what is going on with Hello Kitty in this picture. One arm is through her strawberry basket.  One arm is growing out of her clavicle and her third arm is a loaf of bread. 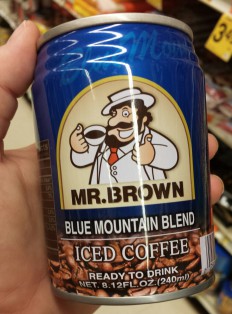 Mr. Brown’s coffee? Racist much? This is literally a caricature of a person with brown skin here to serve you up some bougie iced coffee in a can that you won’t recycle because you don’t care about the earth, you entitled, rich, white bastard.

That’s when I had to put the can down and head to the register. I didn’t buy the iced coffee, Hello Kitty stuff or the salad cream. I really really really wanted the Jesus magazine but I couldn’t justify it. Religious guilt just never goes away, does it?

For pretty much my whole life, I have worn every hurt and sadness I’ve felt as an invisible strand of pearls around my neck.  I didn’t realize this, of course, until I was an adult, and by that time I was quite bedazzled.  We’re not talking major trauma here;  I’m just a very sensitive bunny and tend to take everything to heart. By the time I learned how to let go, I had the emotional equivalent of Lupita N’yongo’s Oscar dress.  As David Foster Wallace said, “everything I’ve ever let go of has claw marks on it.”

Around the same time that I began realizing I could remove some of those strands of pearls, I noticed my sweet, graceful friend Amanda’s tattoo on her foot. All it said was “surrender.”  I tried not to stare. I gushed about her tattoo, and asked her what it meant.  I stumbled over my words as I often do. (I express myself much better in writing, as I am able to backspace right on over all the “ums” and “you knows”.) Sweet Amanda was very patient and said that if I liked it that much, then I already knew what it meant. I definitely had no idea what it meant. But then I started to ask myself why I thought I didn’t know. And though I wasn’t quite sure yet, I started to think of it as as my personal motto.

In March 2013 I walked into Jinx Proof in Georgetown and with a nervous hand signed my name on a consent form.  I acknowledged that I was over 18 (heh) that I had eaten within the past four hours, that I wasn’t drunk and that I knew what I was getting into.  I had known for almost ten years.

My gals Paula and Megan went with me. Megan was getting her nose pierced (which I did, too in a real-quick-do-all-these-things-before-I-chicken-out kinda way).  Paula was just along for the ride, mostly for moral support, but I think also she never really thought I’d do it, what with the decade of mulling over she’d witnessed.

“I really want to get another tattoo, too!  If I don’t get one at least once a year, I get antsy,”  Paula said. She got her first at 18. She mulled nothing over. “I think I wanna get feet with the toes slightly pointed in, like they’re in tadasana.”  She’s a yoga teacher.

“I love that idea!” I said.  I thought we could Google-images it at dinner.

I was led back to the tattoo area, handed the tattoo artist the crumpled paper from my purse on which I had written the word surrender about twenty-five times. He made a stencil, and I plopped my foot up on the table, inadvertently knocking over some sterile bandages the artist had laid out.

“Oops!  Sorry. I’m kind of nervous.  It’s my first tattoo and I’ve been thinking about this for almost a decade!  It’s got a very special meaning to me and my friend Amanda…”

Suddenly I heard crazy giggling coming from the tattoo station next to me, and  Paula’s excitable voice saying, “I JUST THOUGHT OF THIS TATTOO TODAY!!!”

And that is the difference between me and Paula, an Aquarius and a Virgo, someone who trusts the universe and someone who is often delayed by planning and perfection, and ten years versus ten minutes.

I emailed Amanda to show her my new tattoo….She said, “Hope it becomes the great reminder to you that it has been to me.  Just wait for the good things to come your way!”